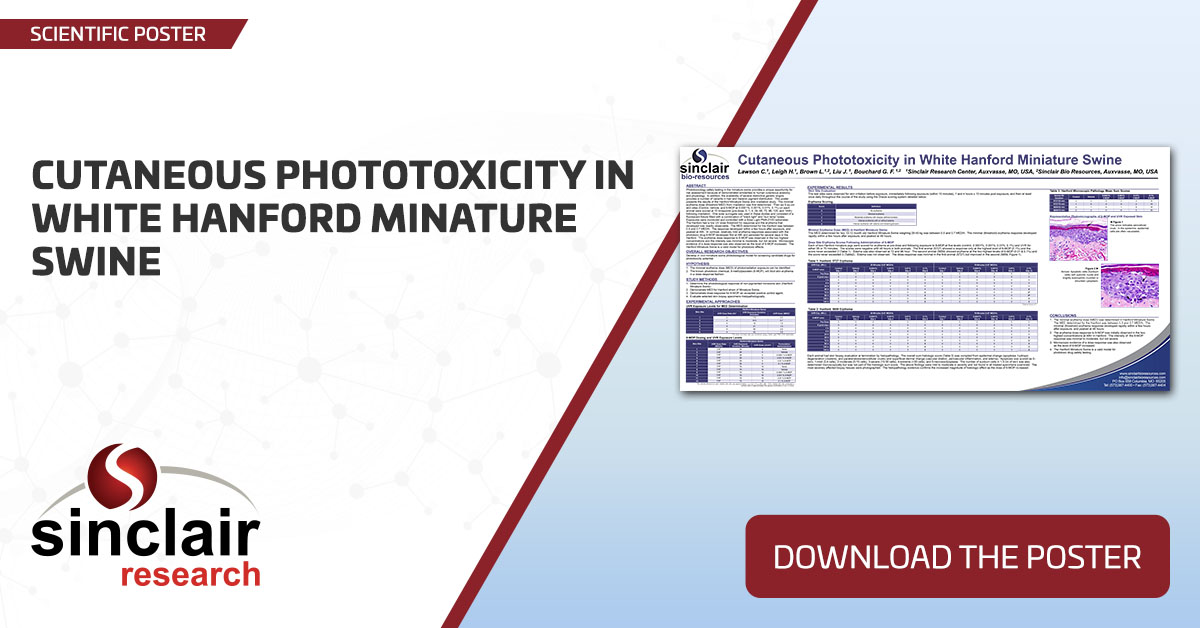 Phototoxicology safety testing in the miniature swine provides a unique opportunity for risk assessment because of demonstrated similarities to human cutaneous anatomy and physiology. In addition, the availability of several distinctive genetic origins provides a number of variants in hair and melanin pigment distribution. This poster presents the results of the Hanford Miniature Swine skin irradiation study. The minimal erythema dose (threshold MED) from irradiation was first determined. Then six 5 sq cm skin sites (Control, Vehicle, and 8-MOP at 0.0001%, 0.001%, 0.01%, 0.1%) on each animal were scored at 10 time points (pre-dose, 0, 1, 4, 24, 48, 72, 96, 120, and 144h) following irradiation. One solar surrogate was used in these studies and consisted of a fluorescent fixture fitted with a combination of “black light” and “sun lamp” tubes. Exposures were monitored and controlled with a Solar Light PMA-2100 radiometer. The Hanford had a low UV dose threshold for response and the erythema that developed was readily observable. The MED determined for the Hanford was between 0.5 and 0.7 MED/h. The response developed within a few hours after exposure, and peaked at 48h. In contrast, relatively mild erythema responses associated with the phototoxic drug 8-MOP developed first at 48h and persisted for several days in the Hanford. The erythema dose-response to 8-MOP was observed in the two highest concentrations and the intensity was minimal to moderate, but not severe. Microscopic evidence of a dose-response was also observed as the level of 8-MOP increased. The Hanford Miniature Swine is a valid model for phototoxic effects.