EFFECTS OF MINOXIDIL ON HAIR GROWTH IN MINIPIGS 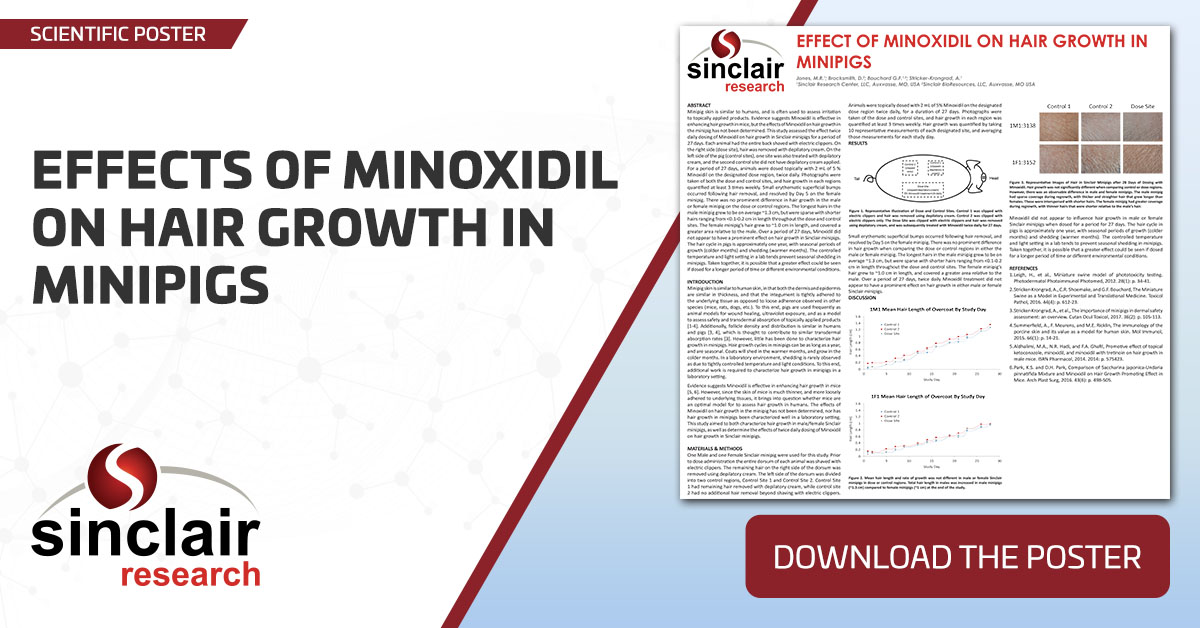 Minipig skin is similar to humans, and is often used to assess irritation to topically applied products. Evidence suggests Minoxidil is effective in enhancing hair growth in mice, but the effects of Minoxidil on hair growth in the minipig has not been determined. This study assessed the effect twice daily dosing of Minoxidil on hair growth in Sinclair minipigs for a period of 27 days. Each animal had the entire back shaved with electric clippers. On the right side (dose site), hair was removed with depilatory cream. On the left side of the pig (control sites), one site was also treated with depilatory cream, and the second control site did not have depilatory cream applied. For a period of 27 days, animals were dosed topically with 2 mL of 5 % Minoxidil on the designated dose region, twice daily. Photographs were taken of both the dose and control sites, and hair growth in each regions quantified at least 3 times weekly. Small erythematic superficial bumps occurred following hair removal, and resolved by Day 5 on the female minipig. There was no prominent difference in hair growth in the male or female minipig on the dose or control regions. The longest hairs in the male minipig grew to be on average ~1.3 cm, but were sparse with shorter hairs ranging from <0.1-0.2 cm in length throughout the dose and control sites. The female minipig’s hair grew to ~1.0 cm in length, and covered a greater area relative to the male. Over a period of 27 days, Minoxidil did not appear to have a prominent effect on hair growth in Sinclair minipigs. The hair cycle in pigs is approximately one year, with seasonal periods of growth (colder months) and shedding (warmer months). The controlled temperature and light setting in a lab tends prevent seasonal shedding in minipigs. Taken together, it is possible that a greater effect could be seen if dosed for a longer period of time or different environmental conditions.