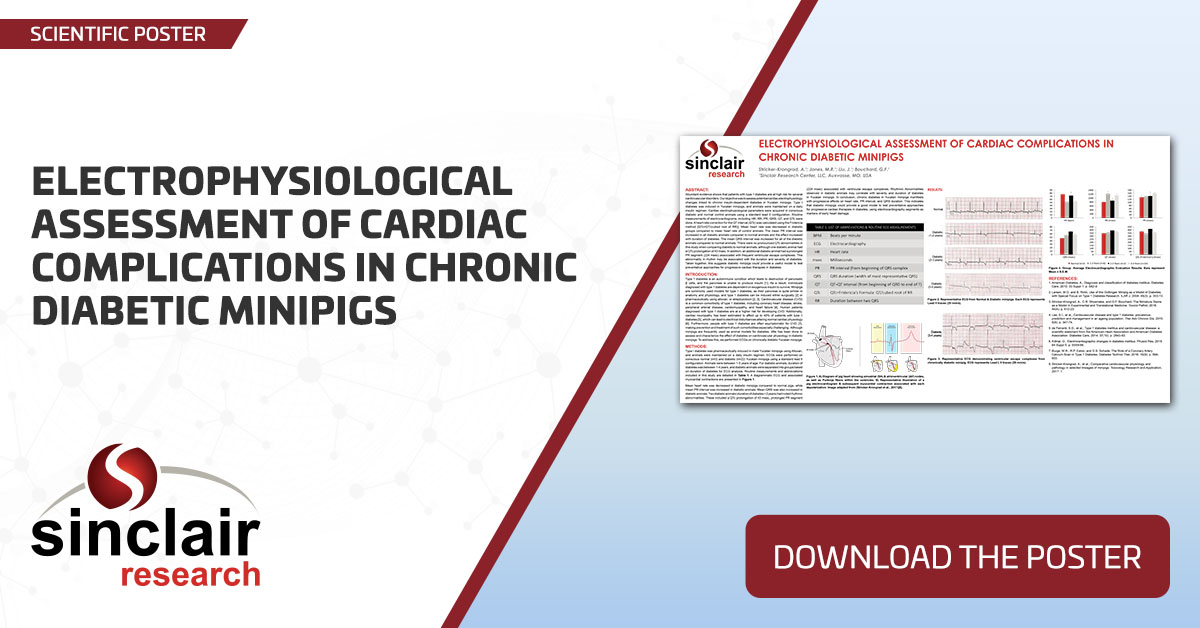 Abundant evidence shows that patients with type 1 diabetes are at high risk for several cardiovascular disorders. Our objective was to assess potential cardiac electrophysiology changes linked to chronic insulin-dependent diabetes in Yucatan minipigs. Type I diabetes was induced in Yucatan minipigs, and animals were maintained on a daily insulin regimen. Cardiac electrophysiological parameters were acquired in conscious diabetic and normal control animals using a standard lead II configuration. Routine measurements of electrocardiograms, including HR, RR, PR, QRS, QT, and QTc were done. A heart rate correction for the QT interval (QTc) was calculated using the Fridericia method [QTc=QT/(cubed root of RR)]. Mean heart rate was decreased in diabetic groups compared to mean heart rate of control animals. The mean PR interval was increased in all diabetic animals compared to normal animals and the effect increased with duration of diabetes. The mean QRS interval was increased for all of the diabetic animals compared to normal animals. There were no pronounced QTc abnormalities in this study when comparing diabetic to normal animals, although one diabetic animal had a QTc prolongation of 43 msec. In addition, an additional diabetic animal had a prolonged PR segment (224 msec) associated with frequent ventricular escape complexes. This abnormality in rhythm may be associated with the duration and severity of diabetes. Taken together, this suggests diabetic minipigs could provide a useful model to test preventative approaches for progressive cardiac therapies in diabetes.

Type 1 diabetes is an autoimmune condition which leads to destruction of pancreatic β cells, and the pancreas is unable to produce insulin [1]. As a result, individuals diagnosed with type 1 diabetes are dependent on exogenous insulin to survive. Minipigs are commonly used models for type 1 diabetes, as their pancreas is quite similar in anatomy and physiology, and type 1 diabetes can be induced either surgically [2] or pharmaceutically using alloxan, or streptozotocin [2, 3]. Cardiovascular disease (CVD) is a common comorbidity of type 1 diabetes, including coronary heart disease, stroke, peripheral arterial disease, cardiomyopathy, and heart failure [4]. Human patients diagnosed with type 1 diabetes are at a higher risk for developing CVD. Additionally, cardiac neuropathy has been estimated to affect up to 40% of patients with type 1 diabetes [5], which can lead to electrical disturbances altering normal cardiac physiology [6]. Furthermore, people with type 1 diabetes are often asymptomatic for CVD [7], making prevention and treatment of such comorbidities especially challenging. Although minipigs are frequently used as animal models for diabetes, little has been done to assess and characterize the effect of diabetes on cardiovascular physiology in diabetic minipigs. To address this, we performed ECGs on chronically diabetic Yucatan minipigs.

Type I diabetes was pharmaceutically induced in male Yucatan minipigs using Alloxan, and animals were maintained on a daily insulin regimen. ECGs were performed on conscious normal (n=3) and diabetic (n=22) Yucatan minipigs using a standard lead II configuration. Animals were between 1-5 years of age. For diabetic animals, duration of diabetes was between 1-4 years, and diabetic animals were separated into groups based on duration of diabetes for ECG analysis. Routine measurements and abbreviations included in this study are detailed in Table 1. A diagrammatic ECG and associated myocardial contractions are presented in Figure 1.