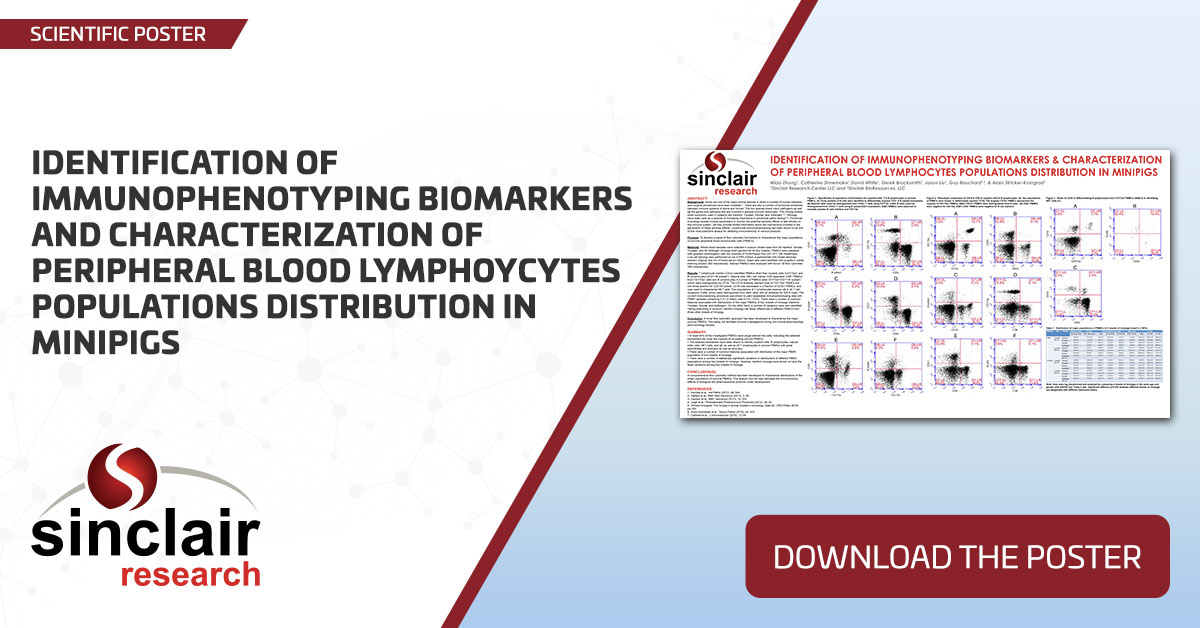 Background: Swine are one of the major animal species in which a number of human diseases and surgical procedures have been modeled. There are also a number of functional similarities between immune systems of swine and human. The two species share many pathogens as well as the genes and pathways that are involved in general immune responses. The minipig breeds most commonly used in research are Hanford, Yucatan, Sinclair, and Gottingen. Minipigs have been used as  species of increasing importance in preclinical safety testing. Preclinical toxicology studies include parameters to monitor the potential adverse effects of test articles on the immune system, yet they provide limited information about the mechanisms involved in the generation of these adverse effects. Lymphocyte immunophenotyping has been shown to be one of the most predictive assays for detecting immunotoxicity of various products.

Results: T lymphocyte marker (CD3ε) identified PBMCs other than myeloid cells (CD172a+) and B lymphocytes (CD21+/B subset+). Natural killer (NK) cell marker CD8 separated CD8+ PBMCs from CD172a+ cells and B lymphocytes. A number of PBMCs were CD172a+CD21+/B subset+, which were distinguished by CD16. The CD16 antibody stained most of CD172a+ PBMCs but not those positive for CD21/B subset. CD16 was expressed in a fraction of CD3ε+ PBMCs, and was used to characterize NKT cells. Two populations of T lymphocytes express αβ or γδ T cell receptors (TcRs), which were distinguished from each other with an antibody for TcR δ chain. The current immunostaining procedure was shown to yield repeatable immunophenotyping data with PBMC samples containing 0.3-1.0 million cells (CV% <15%). There were a number of common features associated with distributions of the major PBMCs of four breeds of minipigs (Hanford, Yucatan, Sinclair and Gottingen). On the other hand, a number of variations were also identified. Taking everything in account, Hanford minipigs had fewer differences in different PBMCs from three other breeds of minipigs.

Conclusion: A novel flow cytometry approach has been developed to characterize the major porcine PBMCs. This assay will facilitate immune investigations during non-clinical pharmacology and toxicology studies.