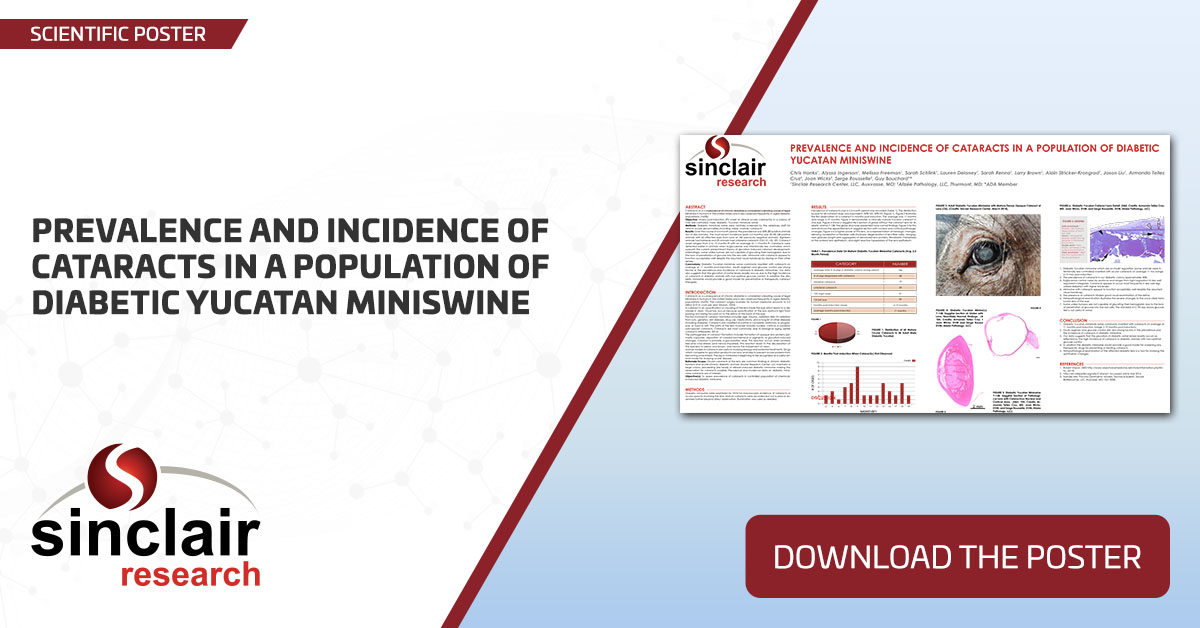 Cataracts as a consequence of chronic diabetes is considered a leading cause of legal blindness in humans in the United States and is also observed frequently in aged diabetic populations (>65%).

Results: Over the course of a 6 month period, the prevalence was 30% (80 positive animals out of 266 animals). The most recent incidence (past 2.5 months) was 20.4% (38 positive animals with 60 affected eyes from pool of 186 previously negative animals). Eighteen animals had bilateral and 20 animals had unilateral cataracts (OD: 31; OS: 29). Cataract onset ranged from 2 to 19 months PI with an average of 11 months PI. Cataracts were detected earlier in animals when euglycaemia was intentionally less controlled, which supports the current predominant theory of glycation–induced cataract development. Interestingly, swine unlike human are not capable of glycating their hemoglobin due to the lack of penetration of glucose into the red cells. Miniswine with cataracts appear to function acceptably well despite the assumed visual handicap by relying on their other senses.

Conclusions: Diabetic Yucatan miniature swine commonly manifest with cataracts on average at 11 months post-induction. Insulin regimen and glucose control are strong factors in the prevalence and incidence of cataracts in diabetic miniswines. Our data also suggests that the glycation of swine lenses readily occurs due to the high incidence of cataracts in diabetic animals with non-optimal glucose control. In addition the diabetic miniswine would provide a good model for preventative or therapeutic cataract therapies.